Under the title "Breaking the Silence - The Wrath of Mdachi bin Sharifu", an exhibition is on display in the Small Synagogue (An der Stadtmünze 4, Erfurt) until 16 January 2021, in which scientists from the University of Erfurt are also involved. The exhibition is accompanied by lectures, discussions, readings and film screenings.

On 21 September 1919, Mdachi ("the German") bin Sharifu, a Kishwahili lecturer from what is now Tanzania, gave a lecture on "Our Colonial Past" in Erfurt's Kaisersaal. He was invited by the German Peace Society and the pacifist New Fatherland Federation. The very title of the lecture was a provocation. With the signing of the Versailles Peace Treaty at the end of June 1919, the German Reich had lost its colonies. "Our Colonial Past" reaffirmed to the emerging colonial revisionism the end of German expansionist efforts. The reaction of the Erfurt press was correspondingly divided: The left-social-democratic tribune reported benevolently: "In a surprisingly good lecture", it was said with paternalistic impact, Sharifu had given his audience "news of the often quite inhuman treatment", "which the natives of Deutsch-Ostafrika had experienced from the German officials and white colonists". In contrast, the German national newspaper Thüringer Allgemeine Zeitung was indignant about the "accusations of the black man against the Whites, and especially against us Germans".

Sharifu's Erfurt lecture was part of a round trip, which took him to Hamburg and Cottbus in summer 1919, besides several lectures in Berlin. Shortly before the conclusion of the Versailles peace negotiations, Sharifu had signed a petition initiated by the Berlin underground train driver Martin Dibobe. The petition, which was addressed to the Weimar National Assembly, called for "equal rights" for all Afro-Germans - throughout the Reich, i.e. both in the colonies and on European soil. The exhibition "Breaking the Silence - The Wrath of Mdachi bin Sharifu" by Berlin Postkolonial makes these connections visible and wrests early Afro-German activism from oblivion. Based on selected original photographs from the collection of the plantation owner Karl Vieweg, provided by the Tanzanian Embassy, the exhibition deconstructs the long-lived myth of the colonised's loyalty to the German Empire.

The programme of the series of events can be found in the flyer on the website of  "Decolonize Erfurt".

Livestream of the event on 2 November, 6 pm 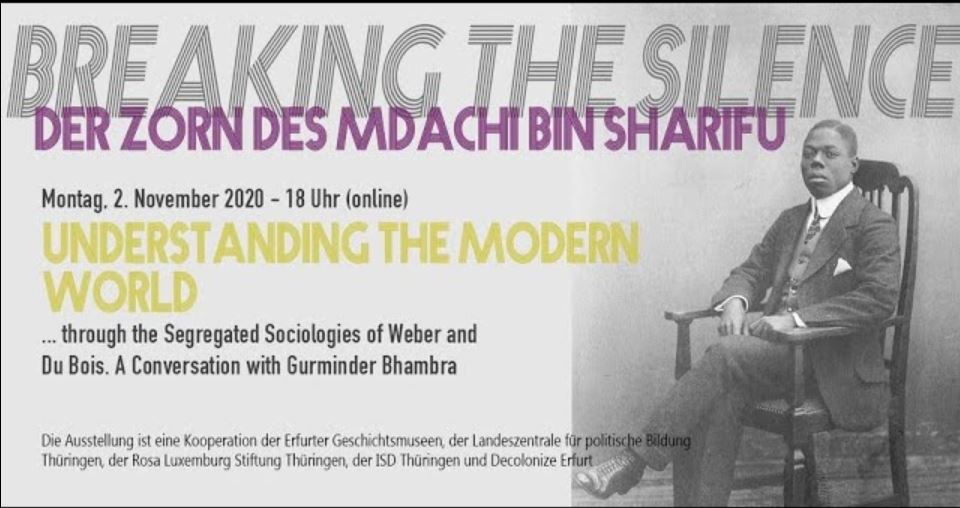