The Willy Brandt School of Public Policy, Germany's oldest public policy school, is situated within its newest public university, the University of Erfurt. Created in 2002 as part of the Faculty of Legal, Social and Economic Sciences and turned into an independent research institution in 2008, the School has operated since as an interdisciplinary, practice-oriented and international institute of higher education that has been preparing students for the demands and challenges of today's complex political world.

Nearly fourty years ago, Willy Brandt, in his capacity as chair of the North-South Commission, foresaw the emergence of that world and likened it to the ‘rise of a new civilization.’ It would bring with it challenges unprecedented in magnitude and complexity, yet it would also enable new ways of addressing these, based on the heightened awareness of global interconnectedness and the clear-headed confidence in the possibility of collective political action.The Brandt School’s mission is to capacitate future policy-makers from around the world along these premises. It has done so by combining the time-tested curriculum of the grand North American public policy schools with the distinctive perspective that its location at the very centre of Europe and at the crossing point between West and East, ‘old’ and ‘new’ entails.

The resulting Brandt School approach stands out through its systematic trans-disciplinarity, its comprehensively global focus, and its methodical linking of theory and practice.It is also at the cutting-edge of our times, taking the geopolitical rise of the global South as seriously as the continuing relevance of the legacy of the global North. It is neither limited to mature democracies, nor to elite decision-making, but encompasses all types of policy environment, from state administration to non-state governance, from conflict and transition to development and conservation. In this, it purposely seeks to go beyond the provision of technocratic expertise and instead aspires to endow its students with the analytical toolkit needed to understand and interact with the functional logics behind political, social, and economic processes in a diversity of operational theatres.

Along these lines, the Brandt School has been educating future leaders in government, civil society, and private enterprise for almost twenty years now.

At the core of the Brandt School's teaching is the Master of Public Policy Program, which is embedded in a dynamic and highly innovative research environment in which cutting-edge public policy themes are explored in an integrated manner and the methodological frontiers of the social sciences expanded. Understood as a discipline of disciplines, public policy sits at the interface between theory and practice, understanding and engagement, knowledge and politics.

The entrepreneurial approach is also visible in the Brandt School's research.

The research at the Brandt School deals with policy problems from a multi-disciplinary perspective, combining theoretical and applied research and is reflected in the specialization modules offered in the Master's Program. The core areas of research at the School are

Thanks to its partners, and in particular the Haniel Foundation, the Brandt School has been able to make the most of its unique location in Thuringia’s capital Erfurt, in the very centre of the unified Germany, imbued with deep historical significance from the Reformation to the Thirty Years' War, from Weimar to the Wall, with close infrastructural and intellectual ties to other important centres, Berlin, Frankfurt, Dresden, Prague, to name but a few.
It is a setting in which the sort of reflective space required for policy-makers of the future thrives. It is the place to be!

Read more about the Brandt School's approach and the current Director's vision for the School's future in an interview of the Bulletin Blog.

The Brandt School is currently headed by

Read "An Erfurt Success Story"about the Brandt School and Public Policy, published by Prof. Dr. Heike Grimm in the Haniel magazine "enkelfähig" in 2016.

Who was Willy Brandt?

The Willy Brandt School of Public Policy is named in the honor of former German chancellor, Willy Brandt, who as a policymaker and as a person embodied the goals and ideals this school stands for.

Willy Brandt stands for a desire for change and reform – in domestic and foreign policy. The fourth chancellor of West Germany guided a series of social, legal, and political reforms – even in the face of stark resistance. His policy declaration challenged the citizens of the country to "dare more democracy".

In foreign policy, Willy Brandt wanted to establish a climate of confidence and reconciliation. The famous moment when he spontaneously fell to his knees in a gesture of humility and penance towards victims of the Warsaw Ghetto Uprising became an iconic demonstration of the new Germany’s desire for reconciliation and established him as a figure of credibility.

Advancing from this point he sought new policies: Willy Brandt’s New Ostpolitik paved the way for reconciliation with the communist countries in Eastern Europe. True to the motto "change through rapprochement", he concluded the Warsaw-Treaty, finally recognizing the Oder-Neisse Line, and the Basic-Treaty which established formal relations between the two German states for the first time since partition.

While the New Ostpolitik won him the Nobel Prize for Peace in 1971, it was highly contested at home and cost him political alliances and sympathies. Only by a slight margin of two voices did he survive a "No Confidence Vote" as chancellor. Today, it is agreed that his policy opened up possibilities for German reunification.

Secondly, Willy Brandt was also the first west German chancellor to officially visit the GDR; his visit to Erfurt became history. During Willy Brandt’s overnight visit on March 19-20th, 1970, no treaties or agreements were concluded. However, something intangible yet significant happened. Being cheered by GDR citizens, Brandt’s visit indicated that the end to international isolation – triggered by his policy – posed dangers to the GDR regime. To this extent Erfurt can be seen as a moment of truth as the governing elite became aware of the risks associated with moving fronts between East and West.

After his chancellorship, Brandt played an important role in the North-South Dialogue: As Chairman of the Independent Commission for International Development Issues, known as the Brandt Commission, he called for drastic changes in the global attitude towards development in the Global South. In the North-South report, issued in 1980, the commission addressed the world's problems from a collective point of view and showed the path towards a more equitable international order.

He had a keen understanding of the fact that the future would need to bring a more balanced relationship between countries from both hemispheres and that we must work towards this future. With this in mind, he introduces his second report Common Crisis with the words:

“A new century nears, and with it a new civilization. Could we not begin to lay the basis for that new community with reasonable relations among all people and nations, and to build a world in which sharing, justice, freedom and peace might prevail?” (Second Brandt report: Common Crisis: Cooperation for World Recovery, 1983)

Considering all of his accomplishments and his rich political legacy, the Willy Brandt School carries his name and strives to educate students in his spirit: Our students shall become active and unwavering leaders and policymakers in a changing world, they shall be capable of facing reality and bringing about a new one, they shall be daring in finding new solutions to pressing problems, while always acting with a strong sense of responsibility.

Join the Willy Brandt School of Public Policy and apply for the MPP program. The Master of Public Policy (MPP) is a two-year interdisciplinary degree program. It equips future decision makers with the knowledge and practical skills they will need to advance the public interest and make sound policy decisions. 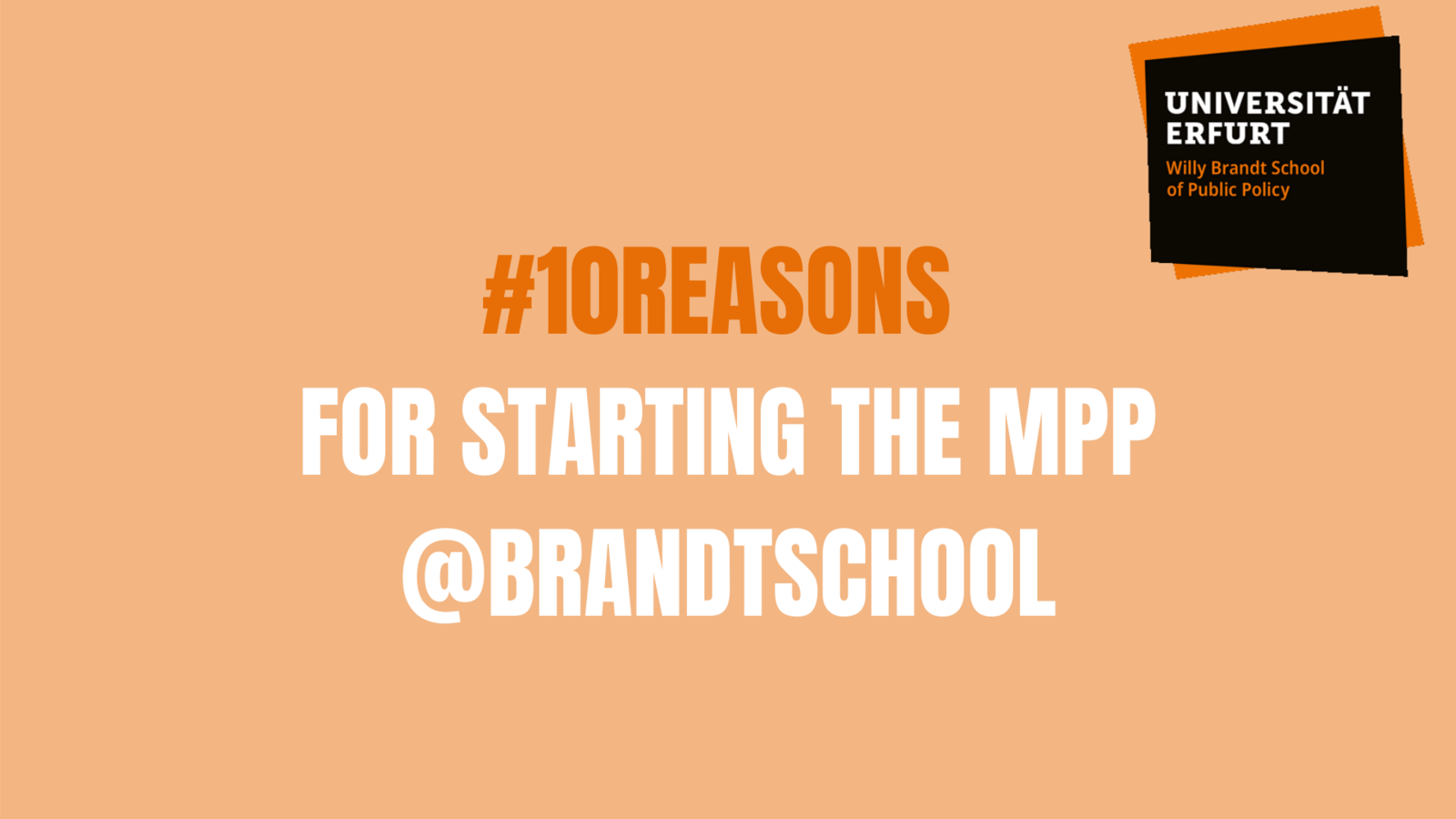